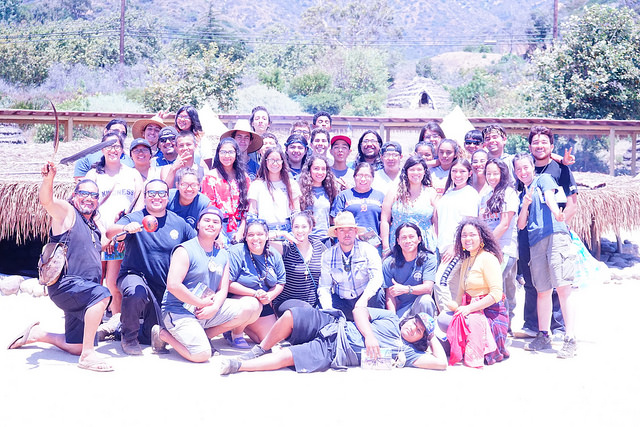 The Native Youth to College program (NY2C) is now coming to an end it is appropriate to say a couple words of farewell. The first words go out to the elders which are the reason any of the activities within the program were possible. They did a great job of mixing fun with learning and deciding which times were appropriate for which. Julia, Scott, and the mentors did an excellent job of guiding the youth. Without them we would not have any foundations to build upon. From those foundations there were many takeaways from the program. NY2C wove together getting into college, college life, as well as importance of culture. Every student shined during the two weeks while we were together. I am going to miss all of the family I have gained here. Hopefully we do not forget one another and that our roads cross in the future. Notice how the final words are farewells and not goodbyes, this is because we will see each other in the future in one form or another.

Today was full of wonderful moments! It started for me at 6am waking up and walking outside to find Cuauhtli and Jasson ready to run. We ran around all the campuses and then went to Indigenous games with Hector. It was fun starting the day off in the early golden light and finding the energy in ourselves to run and run and run. Throughout the day we toured Pomona College, ate delicious food, swam in the pitzer pool and then watched Spirit Game. The movie was very inspiring and it just so happened that one of our mentors my amazing friend Phil who I love is from one of the 6 nations, whose team the film followed. I loved the movie because it had me hanging off my seat hoping the Iroquois team would win and taught me a lot about the history of the 6 nations and how colonization continues to affect them today. There was a moment in the film where the Canadian Coach was sitting next to one of the Chiefs. They were sitting in the tribal councils log building. The film had just discussed how the Kanadian team refused to get their passports stamped. The coach said it was just a big misunderstanding and laughed it off. There are subtitles during this sequence because the chief’s words are a muffled by one side of his lips. He explains that he recently had a stroke. The Kanadian coach says some words about how canada needs to treat its Native people better. It seems like he is trying to seem progressive, even though his team just refused to respect the sovereignty of the nations by getting their passports stamped. The chief doesnt look at the coach, but with clear eyes describes how men come to him and think they can spent a couple minutes with him and learn the history. They come to him without knowing anything about his people. They expect his people to sit down and tell them the history, quickly and then they leave. The subtitles roll across the screen and the coaches eyes flicker behind his fake smile. The chief continues describing the ignorant men who come. His eyes do not look in the coach’s direction.

It was a great day. I cant wait for tomorrow.

Today i watched the movie Spirit Game: Pride Of The Nation, and as soon as the movie started i could not stop watching. The movie was intense and overall interesting. The Producer of the movie (Gale), did an incredible job. I Cant imagine how much work and effort all of the cast crew put into this film. The over all review is that i can watch this film over and over until i’m blind.

Please come out to celebrate the Graduation and achievements of the 2016 Native Youth to College Program students!

Graduation will be Friday, August 5th, 2016 (see invite below). It will also be livestreamed here for those who cannot be here in person!:

Thank you for the wait while we ironed out those pesky IT wrinkles.

THE ONLINE student application and recommendation form are available to fill out online.

It’s just like the paper application we sent out. There is an option as well to save your work and come back.

Good luck and please let us know if you run into IT issues. If you do have issues, please contact scott_scoggins@pitzer.edu.

A big thank you to Joseph Dickson at Pitzer Office of Communications, for putting this together for us.

We have made a lot of new changes, so please take the time to carefully read all the new directions/program changes and GET EXCITED!!!

Highlights of the exciting activities for summer 2015 will come soon. For now, tell your friends and family and urge them to fill out an application.