Today we went to Western University for an autonomy lab. I have never seen a cadaver before, so I was pretty nervous. Although I was nervous, I was still excited to be there, mostly curious. I knew it was either going to be a really good experience or bad experience. Thankfully it was a really good experienced, I learned a lot about hearts and lungs. Its crazy to think that there are so many people and every one of the hearts are different. I got to see the difference between abnormal hearts and normal hearts. Some hearts had valve diseases or clogs that give them abnormalities. Every little thing gives a physical change to heart. For example, there was this abnormal heart that had a valve disease which made the valve really stiff. This made the blood flow a lot harder than it should. Due to this, the heart was trying a lot harder to pump from one side which made the muscles get bigger. this caused the heart to grow huge on once side because of the extra effort of the muscles. I also learned how they input mechanical machines into the hearts. One of the hearts had a mechanical valve because of the heart I just described previously. When something stops working, there is a way to fix it. Another heart had a pacer connected to it in order to keeping pumping.

In terms of morality, I didn’t feel immoral thanks to the man that inspires me, Vicente. He smudged the whole group down before we went in. I thought that was really important because some cultures are very strict about cadavers, just like Katie McCray explained. Vicente smudging us down helped me and my conciseness think I’m safe. After we came out, I wanted to laugh. Vicente said he felt the bad energy and quickly smudges us down again. I believe the guy! Everything Vicente does for us is amazing. Even though he does take a while to talk, I don’t care because thats how indigenous people go. Indigenous people have always taken long talks and thats how it should be. I hope that I learn from him one day. Anyways the day was really great and I’m always up for new experiences.

No pictures today so here:

We went to Western University today and sewed together a pig’s leg. It was really fun but super stinky. Brittany hated the smell of the pig’s feet… 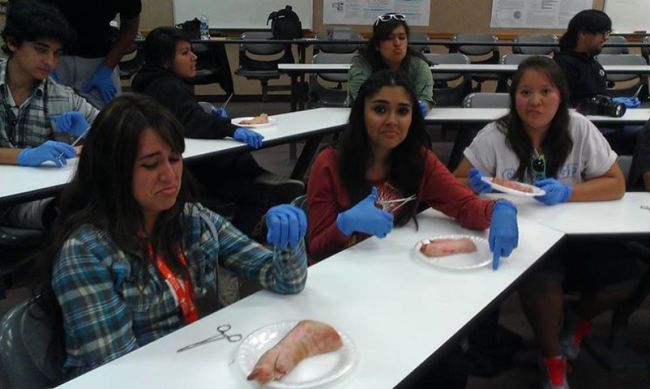 It was interesting but informative. I think I did a really good job. 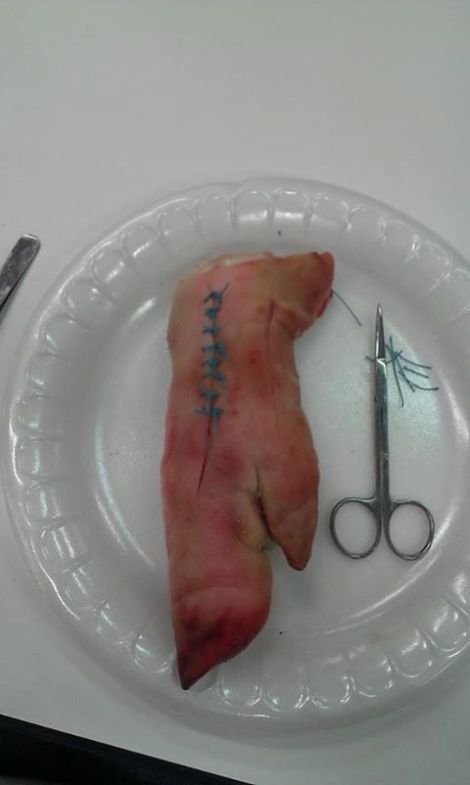 Come out to learn about forensic Science and fingerprinting, figure out your blood type, or dissect a sheep brain. There will be a bunch of kids from Sherman Indian High School and everyone is welcome! Oh, and Lab Coats will be handed out for students to wear!! Soo Cool!

You can preregister or just register when you get there.

Yesterday was the first day at camp, it was such a fun filled day with so many great speakers. We began our day at 7:30 a.m. and all had breakfast together. We then after began to blog which was many of our first time. The biggest event that had occurred was going to Western University, the experience for me was greater than words. Just to be on a college campus full of students who want to be apart of the medical field was a great sight. There were six guest speakers that spoke to us yesterday, they all brought something different to the table. The first guest speaker talked about diabetes and how it plays a role on our community. The second guest speaker were two ladies who talked about our health and what type of foods we should be eating; they showed us multiple ways to exercise without having to go outside. The third guest speaker was probably my absolute favorite, because it was more of a personal experience and he gave us his point of view on diabetes. He was first diagnosed with diabetes when he was seven, its crazy to know that he had diabetes for over 30 years now, that shows strength and courage to me. The last speaker was also one of my favorites, she was a young doctor who gave us her personal story about how she came about choosing to be a doctor and her life growing up. She gave us tips on how to pick our right career and exactly the steps it took to get as far as she did. At the end of the lecture she asked us questions that she wanted us to answer to help her out with the class she teaches. So here’s my feedback to her: Some good experiences I had with a doctor was when my Dad would visit his doctor she would constantly be on him about his health. She built a friendship with both me and him and constantly made him feel at his best. When my father passed away,she was so close to him that she felt a part of her leave, so after I gave her flowers to thank her for all she had done. A bad experience would be my doctor, he doesn’t bother to explain that symptom i may have bothering me at the time, that when I go home I have to do my own person research about it. I would love to have a friendship type of relationship because i believe it makes it easier for the patient to open up. Overall yesterday was a good day and something I won’t forget.

A doctor should understand a bit about you, in a way you can’t approach every patient the same way. Some patients would want to be more up front while others may want more of a friend basis.

What should your doctor know about you and/or your people?

Diabetes is all too common in our people. Some may hold the old traditions and not like pills and other kinds of modern day treatments.

What type of questions should your doctor have for you?

Questions about eating habits and exercise are very important, make sure to address the risk of Diabetes.

Any good or bad experiences with doctors?

Most of my visits with doctors have been well, though I know a friend who has been treated horribly due to mental illnesses and the reactions people give her because of that. Many doctors became very hostile towards her when she told them she had decided against taking medicines, only because they all had bad side effects as well. We live in a world very based around the belief that a simple pill can fix anything and everything, though that is not entirely so. Doctors should be ready to help guide a patient towards a path to better help without the wish of medicine if the patient so chooses, peacefully.

What is my ideal physician?

what should my doctor know about me and my people?

What questions should a doctor have?

Any good or bad experiences with doctors

was a mind blowing experience. The students and I had the opportunity to participate in a human anatomy lab in which we were introduced to various body parts such as the brain, heart, and lungs; we were able to work with real human body parts. Being able to hold the heart of a deceased individual who had undergone multiple bypasses really hit home…About a year ago my mom had a couple of blocked/clogged arteries and had to undergo open heart surgery…Being able to hold the heart in my hands not only exposed me to but also helped me to further understand the causes and effects of a blocked/clogged artery. I am truly thankful to still have my mom around today, she is thee best :] ❤